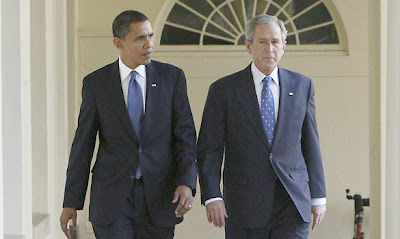 «Days before Bradley - now Chelsea - Manning was sentenced to 35 years in prison for helping expose U.S. war crimes in Iraq, the Obama Department of Justice filed a petition in federal court arguing that the perpetrators of those crimes - Bush, Cheney, Rumsfeld et al - enjoy “absolute immunity” against criminal charges or civil liability. The filing came in a suit brought by Sundus Shaker Saleh, an Iraqi single mother and refugee now living in Jordan, who alleges that the planning and waging of the Iraq war under false pretenses constituted a "crime of aggression" under a law used in the Nuremberg trials. With neither Congress nor Obama willing to hold Bush & Co. accountable for the Iraq catastrophe, supporters see the suit as a last-chance tactic to force the issue back into the public eye - an effort the Obama adminstration clearly opposes. More, all dispiriting, on the increasingly flawed Bush-Obama-lesser-of-two-evils thesis, and the current culture of impunity.»
às 16:42