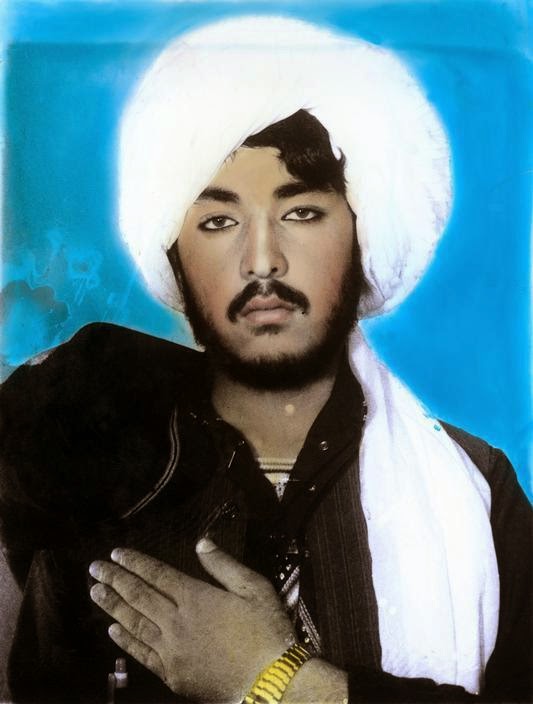 The paper I presented earlier this month at the International Studies Annual Conference held in San Francisco looks at how Afghan masculinities have been represented in and by Anglo-American media. The words ‘Afghan man’ conjure up a certain image, a pathologised figure that is now associated with most males in Afghanistan. The paper analyses this figure of the ‘militant’ Afghan man, most strikingly captured by descriptions of the Taliban and juxtaposes it with the less popular, though still familiar trope of the ‘damned’ Afghan man, embodied in the figure of the Afghan President, Hamid Karzai. But here I focus on a particular construction of the Taliban as sexually deviant, (improperly) homosexual men.

Jasbir Puar, in her trenchant appraisal of today’s war machine and the politics of knowledge that sustains it argues that the depictions of masculinity most widely disseminated in the post 9/11 world are terrorist masculinities:

failed and perverse, these emasculated bodies always have femininity as their reference point of malfunction and are metonymically tied to all sorts of pathologies of the mind and the body – homosexuality, incest, pedophilia, madness and disease.

Whilst representations of al-­Qaeda as pathologically perverse have permeated the Western mainstream, the Taliban because of its historically low international profile has escaped that level of media frenzy. The attention it does get, however, is almost always mired in Orientalist fantasies of Eastern men as pathologically disturbed sodomisers. The ‘high jack this fags’ scrawled on a bomb attached to the wing of an attack plane bound for Afghanistan by a USS Enterprise Navy officer, while in no way ubiquitous, is certainly an edifying example of our image of the Taliban as perverse and not quite “normal”.

This perversity of the Taliban has been largely attributed to their madrassa upbringing, an all-­male environment and their concomitant attitude towards women. Echoing anthropologist Lionel Tiger’s concerns that “it is in the crucible of all­‐male intensity that the bonds of terrorist commitment and self‐denial are formed”, Ahmed Rashid claims that the members of the Taliban had been brought up in a “totally male society”, in the “madrassa milieu”, where “control over women and their virtual exclusion was a powerful symbol of manhood and a reaffirmation of the students’ commitment to Jihad. Indeed, “denying a role for women gave the Taliban a kind of false legitimacy rooted in the political beliefs and ideologies”. Tiger focusing on al Qaeda offers the conventional and over-stated male-bonding thesis as an explanation for their failed masculinity and sexual perversity. In this imaginary, a lethal mix of male homosociality, the segregation of male and female populations and Islamic ideology carves out a space for terrorism, illicit sex and paedophilia. Both al‐Qaeda and Taliban are used as examples of this dangerous concoction.

The Talib is at once “too masculine” and repulsively effeminate. As a Pashtun, he belongs to the “martial races” – a designation invented by the British in the 19th century and is proclaimed to be inherently “warrior­‐like”. These qualities once used to extol the virtues of Afghans as a “noble” “fighting-people” are now used to denounce them as products of a culture of nasty fighting. Indeed, as with all discursive regimes, the question of power (as knowledge) is of paramount importance: we see the culturally sanctioned “hegemonic masculinity” of the 20th century Pashtuns morph into a widely-­reviled, failed masculinity of the Taliban in the 21st century.

Sensationalist reportage on paedophilia among so-called terrorist populations has become pedestrian after 9/11 and Pashtun Afghans have been painted, on more than one occasion, as queer sodomisers. The collection of photographs that Thomas Dworzak recovered in 2001 from dusty photographic studios in Kandahar capture a different side of the Taliban – dressed in colourful clothes, reading books and often with kohl applied to their eyes. However, as Faisal Devji notes in his introduction to The Poetry of the Taliban “these images are seen and described as ‘foreign’ or ‘other’”. Dworzak’s explicit aim in his work was to portray the Talibs as “human” and perhaps even “normal” in their complexity, not the one-dimensional monstrous figures they are conventionally depicted as, however, the photographs have been appropriated and interpreted as evidence of a pathological Pashtun tendency towards “queerness”. 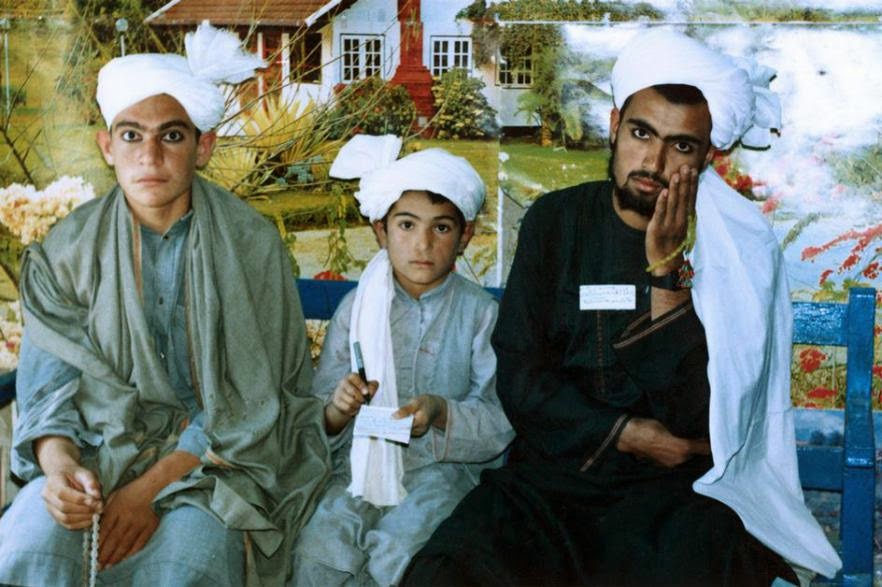 Although Pashtun men are not authentically “homosexual” they are, so this story goes, “culturally” paedophiles. A Telegraph headline opines rather forcefully: ‘Paedophilia Culturally Accepted in South Afghanistan’ and the sentiments are echoed by the Examiner.com which cites U.S. soldiers and Reuters journalists as saying Paedophilia is a “way of life” in Afghanistan. The New York Times contends that paedophilia is the “curse” of “male-dominated Pashtun culture. Tim Reid of The Times writes of the “Pashtun obsession with sodomy”, “the Taliban’s disdain for women” and “the bizarre penchant of many for eyeliner”. In this environment of degeneracy and deviance, the construal of Pashtun men as not quite homosexual but still engaging sexually with other men (or boys) is a profoundly political act. It lets us, as Western observers, bemoan the “state of affairs” in Afghanistan, but it allows us to hope for a brighter future post- intervention. By “saving Afghan women” from Afghan men, we are therefore, also saving Afghan men from themselves in this liberal humanitarian narrative.

However, with both homosexuality (or its lack thereof) and paedophilia it is almost as though the issue at stake here is solely the discomfort experienced by the foreign troops stationed in Afghanistan. In spite of its tongue-in-cheek tone, an article by The Scotsman published in 2002 gets to the heart of the matter. “In Bagram British marines returning from an operation deep in the Afghan mountains spoke last night of an alarming new threat—being propositioned by swarms of gay local farmers.” The reactions of the marines, even if not entirely serious, are telling: An Arbraoth marine, James Fletcher exclaims: “They were more terrifying than the al-­Qaeda [sic]. One bloke who had painted toenails was offering to paint ours. They go about hand in hand, mincing around the village”. In the words of Corporal Paul Richard, the experience was “hell”: “Every village we went into we got a group of men wearing make-­up coming up, stroking our hair and cheeks and making kissing noises”.

The inevitable pop-psychologising follows. The author Chris Stephen offers: “The Afghan hill tribes live in some of the most isolated communities in the country”. And one of his interlocutors, a marine Vaz Pickles adds: “I think a lot of the problem is that they don’t have the women around a lot… We only saw about two women in the whole six days. It was all very disconcerting.” In spite of its jocose tone, the deep-­seated homophobia and racism of these soldiers is notable – a band of effeminate Afghan men are labelled as “more terrifying than al‐Qaeda”.

The San Francisco Chronicle makes the point patently clear: “Western forces fighting in southern Afghanistan had a problem. Too often, soldiers on patrol passed an older walking hand­‐in­‐hand with a pretty young boy”. The choice of words is instructive: it is Western forces who “had a problem”.

And so, visibly perturbed and laden with suspicions about the perverse sexual tendencies and inclinations of the Pashtun people, the US military decided to conduct an academic enquiry into the ways of the Afghan people. The result: a Human Terrain report conducted by the US army on “Pashtun Sexuality”. Ostensibly, to help American soldiers fight better and be more culturally sensitive, the report essentially turned out to be an exercise in sensitising Western fighters to the devious ways of the Other. The report written by Anna Maria Cardanalli, a social scientist (of sorts), claims to draw on ethnographic studies and anthropological expertise argues:

Military cultural awareness training for Afghanistan often emphasizes that the effeminate characteristics of male Pashtun interaction are to considered “normal” and no indicator of a prevalence of homosexuality. This training is intended to prevent servicemembers from reacting with typically western shock or aversion to such displays. However, slightly more in‐depth research points to the presence of a culturally-­‐dependent homosexuality appearing to affect a far greater population base then [sic] some researchers would argue is attributable to natural inclination.

The source of the discomfort, in line with the report on Pashtun sexuality, is that homosexuality in southern Afghanistan, is a) “culturally-­‐dependent” and b) affects a greater number of people than is deemed “natural”. Since the report makes a case for “Pashtun sexuality” as neither “natural” nor “normal”, but as culturally-­‐sanctioned debauchery it becomes easy to label their homosexual interactions as “inauthentic”. 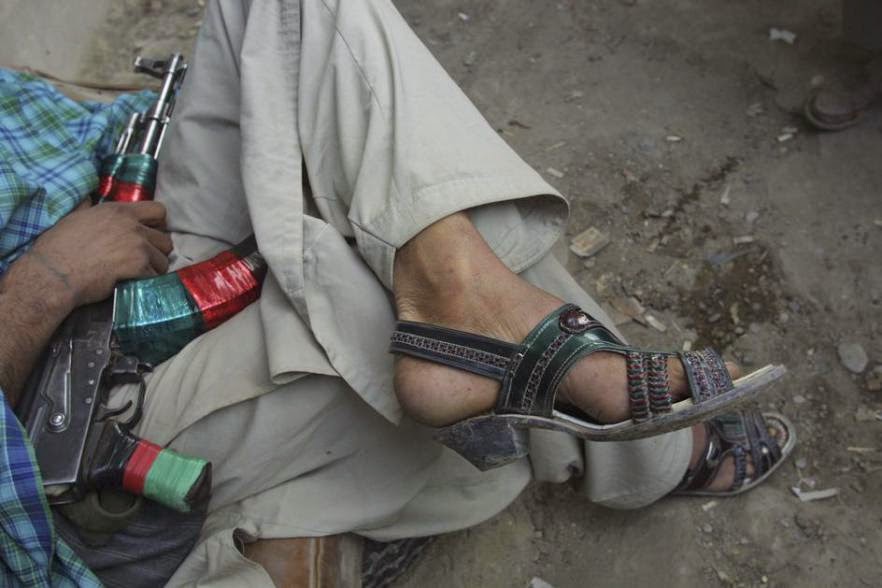 The argument is that “statistically” gay men are supposed to be a minority and given the high incidence of homosexuality in Afghanistan, there is something “deviant” and “unnatural” about this. Indeed, numerous commentaries point out that homosexuality is something “they do” and not something “they are”. Inasmuch as gay men are not a minority in Afghanistan, they are not really homosexual, they are merely deprived – of female intimacy. Similarly, paedophilia is a cultural “norm” in Afghanistan because of the lack of “freely available” women. In accordance with this reasoning, most same‐sex relationships have been reduced to a “Pashtun obsession with sodomy”. Not only does this play into a strange identity politics, whereby we decide what they are and how this makes them different from us, it also often functions in accordance with a reductive causation according to which effeminacy is equated with homosexuality. “Hugging doesn’t mean sex locals tell us, and neither does wearing kohl or colourful sandals.”

The tension in Anglophone reporting about Afghanistan surfaces yet again when grappling with the openness with which men enter into relationships with other men. On the one hand, given the ease with which male-male relationships are discussed in Kandahar one may be forgiven for thinking that Kandahar is exceptionally tolerant, on the other hand the language used by the reporters hints that these relationships are not consensual and even if they are, there is always an undertone of coercion. Indeed, while Tim Reid notes that there seems to be no “shame” or “furtiveness” about their conduct, and others are baffled by the forwardness with which marines are being propositioned, he also says that these young boys are “marked for life”. The contradiction and paradoxes are rife; Reid’s piece is titled “Kandahar comes out of the Closet” although Michael Griffins, also of The Times avers: “in Pashtun society, man­‐woman love was the one that dared not speak its name: boy courtesans conducted their affairs openly.”

In another instance, faced with estimates from her informants that “between 18% and 45% of men [in Kandahar] engage in homosexual sex,” an LA Times reporter Maura Reynolds observed dryly that this is “significantly higher than the 3% to 7% of American men who, according to studies identify themselves as homosexual”. Indeed this “excess” homosexuality makes Afghans suspect and much more likely to be called queer “paedophiles” and “sodomizers” as opposed to gay men or homosexuals. It is telling that the term “bisexual” is not once used to describe these men who often have wives and themselves admit that they like both men and women. As Reynolds’ local contact, Daud himself tells her: “I like men but I like girls better”.

In the final analysis, the (western) assumption that homosexuality is a “minority identity” and therefore must be connected with secrecy is challenged in the Afghan context. The openness and lack of secrecy surrounding same sex relationships in Afghanistan is what confounds most Western observers. Yet again, it is the desire to make sense of, to make legible, these foreign practices that leads to a series of stereotypes and contradictions. That Afghan men may have polymorphous sexual desires or engage in polyamorous relationships is a possibility that lies beyond the purview of the average Anglophone reporter. The messy complexities of a repressive society with its members participating in fluid sexual relationships are too great to comprehend – they are written off as unnatural aberrations in a culture characterized by (in the words of one reporter) “gynaeophobia”.